What Is The Wound Management 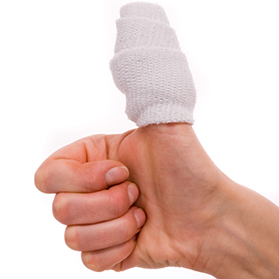 Given accurate approximation of the wound edges, and freedom from infection and haematoma, epidermal healing of a wound occurs extremely rapidly, but the healing processes which go on in the dermis are much more prolonged and, as far as the ultimate appearance of the resulting scar is concerned, much more important. The transition from fibrin, formed between the two surfaces of the wound as the first stage of healing, through the phase of diminishing reaction, to the quiescent relatively avascular scar takes place slowly over a period of months.

Early on, the scar tends to be red and the imme- diate surroundings are indurated. Gradually the induration and redness diminish and disappear, leaving a soft scar, generally paler than the sur-rounding skin. The degree of redness and indura-tion is extremely variable, as is the time taken for the reaction to subside.

The appearance of a scar can be expected to improve for a year and more. This gradually diminishing induration consti- tutes normal progress to quiescence, but such a sequence is not invariable. Instead, the fibrous tissue of the dermis may become hypertrophic giving rise clinically to a raised, red, hypertro-phic scar or, when the reaction is more florid, to a keloid scar.

The tensile strength of the wound gradually increases during the healing phase. The sutures take what little strain there is until they are removed, and if the scar is going to stretch there-after it does so gradually over the next few weeks. Support of the wound for as long as is feasible appears to have little effect.
A scar is more likely to stretch badly when there is obvious wound tension, but often stretching occurs when there is no apparent tension other than that deriving from the normal elasticity of the skin. Nevertheless in many parts of the body the direction of the scar appears to influence the amount of stretching which takes place, and in certain body sites the directions which result in minimal stretching can be systematised into lines of election for scars.

In the face and neck, the lines of election lie at right angles to the direction of the resultant pull of the muscles of facial expression. With the loss of elasticity that goes with ageing they become set into a pattern of wrinkles. In the vicinity of the fiexures, the lines of election are par-allel to the skin creases which are clearly present in the region of the flexure.

In the skin surfaces between the fiexures, the evidence for a specific line of election is less clear cut, and the placing of an incision there is determined more often by considerations other than the eventual appear-ance of the scar. There is great and uncontrollable individual variation in healing characteristics. Examples of factors beyond the surgeon’s control are the age of the patient, the site and often the direc-tion of the wound or incision.

Scars in children generally remain harder and redder for longer than in the adult, and the end result is poorer, this quite apart from the greater tendency of scars in children than in adults to develop hypertrophic change or even keloid. One of the compensations of age is the fact that the more wrinkled the skin the more rapidly a scar settles and the better is its final appearance, hidden amongst the wrinkles.

Scars also behave very differently in different individuals and different parts of the body. Outside the face and neck, scars are apt to stay conspicuous despite careful surgical technique, and stretching even of the most meticulously handled incision is frequent. In the face too, different sites and different skins vary greatly in the way they behave.

Coarse, oily skin tends to produce more than the usual reaction to sutures and suture marks are more common as a result. The problem arises most strikingly in the nose where the skin can be very thick, with active sebaceous glands, most markedly towards the tip. In hairless skin sites, such as the red margin of the lips and the palms and soles, scars are usually less conspicuous.

Probably the best example of the influence of site is the upper ster-nal area where scars almost always become keloid. These unavoidable factors may set a limit to what can be achieved by pure surgical technique, but it is true nonetheless that to produce the best result in a given set of cir-cumstances a meticulous technique is essential. It must also be emphasised that failure in a single aspect may be enough to give a poor result.